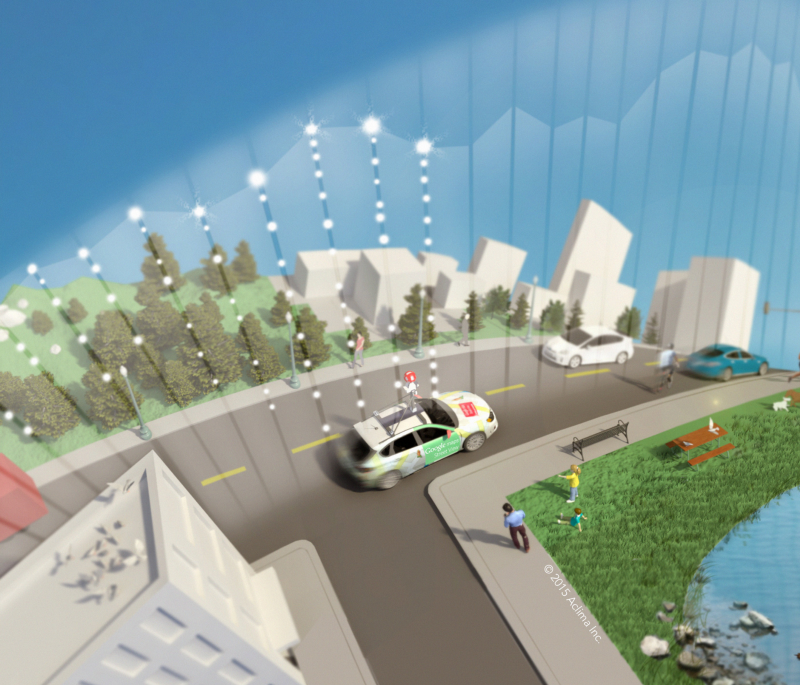 Aclima and Google Maps made the announcement from the main stage at the 11th Annual Clinton Global Initiative Annual Meeting in New York City. The meeting’s theme this year is “Future of Impact”. The mapping effort will make the data available on Google Earth Engine, Google’s geospatial analysis platform.

“With this new data, we seek to introduce a new class of tools and solutions that empower people to live healthier, more informed lives,” said Davida Herzl, CEO and co-founder of Aclima. “Aclima and Google Earth Outreach share a vision of mapping the world with a layer of rich environmental data. We believe this real-time information will transform our understanding of human and planetary health, and enable policymakers and citizens alike to play an active role in improving it. We see a day when hyper-local air quality will be as accessible as the weather.”

“By mapping even more cities with Aclima and their technology, we will be able to share air quality measurements made at the street level and make this information more accessible and useful — essentially making the invisible visible,” Karin Tuxen-Bettman, Program Manager for Google Earth Outreach. “We hope this program not only empowers people to make more informed everyday decisions, but also incites dialog about how to make long-term improvements to air quality.”

With 38 million residents and nearly 30 million registered vehicles, managing California’s air quality is among the most challenging problems in the United States. Aclima and Google Maps commit to using a newly-developed mobile sensor-based technology platform to measure and map air quality in at least three major metropolitan areas in California, including communities in the Los Angeles, San Francisco, and Central Valley regions.

The data will then be made available to scientists and air quality experts, including the United States Environmental Protection Agency (EPA) and the Environmental Defense Fund (EDF). They will explore ways to utilize this data at the community scale and its implications for understanding the human health impacts of air pollution. Community members will be able to access and view street-level air quality maps, overlaid on Google Earth and Google Maps. This commitment will enable individuals, communities, and policy makers to understand and mitigate health and environmental risks where they occur.

Aclima and Google Maps recently announced the successful systems test of this mobile platform in July of 2015 after a month-long pilot test in Denver. The cars clocked 750 hours of drive time and gathered 150 million data points, correlated with data from EPA stationary measurement sites. EPA provided scientific expertise in study design and instrument operations as part of a Cooperative Research and Development Agreement (CRADA) with Aclima. This commitment represents the first major expansion of mapping urban air quality with Aclima and Google Maps.

Why we’re starting with California

California’s cities, some of which rank the worst in the nation for particulate pollution, offer a robust testing ground to explore the benefits of hyper-local air quality data. Air pollution in California costs more than a billion dollars in health care costs annually. Asthma results in an estimated 11.8 million days of work/usual activities missed per year among adults. Public health experts estimate that cutting air pollution like ozone and particulate matter, could alleviate 1 in 3 cases of childhood asthma requiring medical attention every year.

Working with stakeholders at the local level, Aclima and Google’s deployment on Google Street View cars seeks to add clarity to this smoggy picture. Through this new layer of real-time environmental data, we can see our cities more clearly and take action to improve air quality affecting us all.

The state of air monitoring

States are required to monitor and control background levels of air pollution under the Clean Air Act. To assess if air quality is meeting — or exceeding — public health standards, the EPA relies on monitoring stations across the country delivering regional snapshots of air quality. The monitoring network is designed for air quality regulation, but doesn’t give a detailed picture of a community or urban area such that people can get a real sense of what air pollution is in their immediate surroundings.

Highly localized greenhouse gas data is even more limited. Scientists use predictive models to fill in vast gaps with limited data about what is happening in real-time. Aclima’s mobile sensing platform on Street View cars complements current air measurement efforts by introducing a new body of knowledge about air pollution at the street level.

About the Clinton Global Initiative

Established in 2005 by President Bill Clinton, the Clinton Global Initiative (CGI), an initiative of the Clinton Foundation, convenes global leaders to create and implement solutions to the world’s most pressing challenges. CGI Annual Meetings have brought together 190 sitting and former heads of state, more than 20 Nobel Prize laureates, and hundreds of leading CEOs, heads of foundations and NGOs, major philanthropists, and members of the media. To date, members of the CGI community have made more than 3,200 Commitments to Action, which have improved the lives of over 430 million people in more than 180 countries.

In addition to the Annual Meeting, CGI convenes CGI America, a meeting focused on collaborative solutions to economic recovery in the United States; and CGI University (CGI U), which brings together undergraduate and graduate students to address pressing challenges in their community or around the world. This year, CGI also convened CGI Middle East & Africa, which brought together leaders across sectors to take action on pressing social, economic, and environmental challenges.