Taking it to the Streets: Aclima Brings Street-Level Environmental Sensing to CicLAvia

This Sunday, Aclima participated in CicLAvia’s Heart of LA event, the country’s largest open street event. Heart of LA, which took place in the Boyle Heights, Chinatown, Downtown LA, and Westlake neighborhoods of Los Angeles, turns streets into car-free zones to create a vibrant public space for cyclists and pedestrians to enjoy. As part of our commitment to map air pollution in Los Angeles, Aclima-equipped Google Street View cars have been measuring the hyper-local air quality of surrounding streets nearby the Ciclavia route.

“No two CicLAvia events are the same,” said Reuben Herzl, Aclima’s Chief Creative Officer and co-founder. “It’s about discovery. To experience a city without cars is liberating.” CicLAvia aims to bring communities together by opening up a previously unavailable space to the public. While its mission is grounded in community engagement, CicLAvia has also impacted local and regional policy regarding pedestrian and bike use. The events also temporarily improve local air quality by reducing particulate matter and other pollutants due to a decrease in vehicular emissions.

By bringing street-level environmental sensing to CicLAvia, Aclima seeks to bring people together around a new understanding our environment and to empower policymakers and citizens alike to play an active role in improving it.

In addition to mapping air quality in the surrounding regions near Heart of LA, Aclima also partnered with artist and Los Angeles-local, Nick Hanna, to visualize air quality in real-time. On Sunday, Hanna and Aclima’s Reuben Herzl, tricked out “Trikewriter” with Aclima sensors and hit the streets of CicLAvia. The technology project uses a human-powered tricycle and integrated sensors to produce water visualizations of local air data on pavement. Hanna got the inspiration on a trip to China, where he first witnessed the practice of large brushstroke water calligraphy on sidewalks.

The tricycle’s Aclima sensors measure local temperature, humidity, carbon dioxide concentration, and other parameters. The result of the data collection is a series of water visualizations that participants can view as they take part in the event. Hanna’s “Trikewriter” makes the invisible, visible using recycled, potable water.

This year’s Heart of LA route took participants to the city’s newly renovated Grand Park, a pedestrian-friendly open space spanning 12 acres in Downtown Los Angeles. The park, which is part of the larger urban planning initiative Grand Avenue Project, was designed to encourage city exploration. Both initiatives represent an important and growing community in Los Angeles that celebrates public spaces and community building.

We look forward to sharing more from our California mapping campaign in 2017. With environmental intelligence, we can transform the way we manage our urban centers and create healthier communities.

Learn more in the video below. 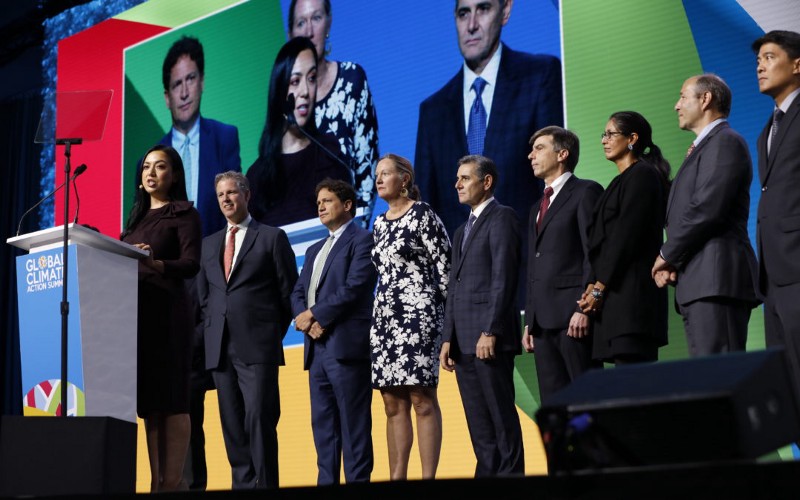