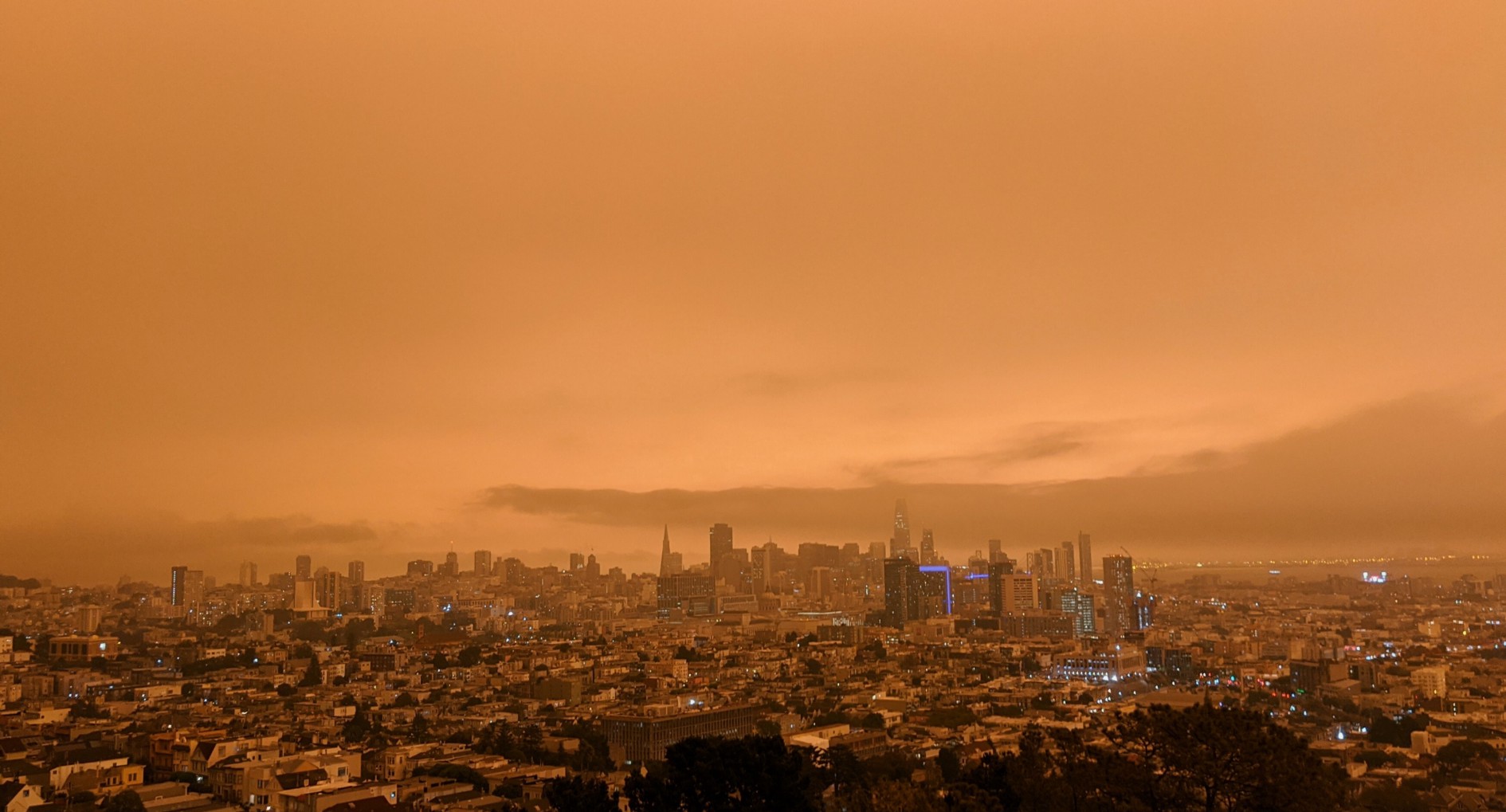 However — despite the eerie glow and blotting out of the sun by an unending blanket of smoke in the atmosphere — fine particulate matter (PM₂.₅) levels on the ground were less elevated than they had been in late August up until September 9. PM₂.₅ concentrations quickly increased the second week of September as the blanket of smoke above mixed into the air we breathe at the ground level. In the following analysis, our scientists took a closer look at the changing air quality in the Bay Area and across California during this time.

Our mobile sensing network is measuring and analyzing air pollution and greenhouse gases block-by-block (hyperlocal), weekdays and weekends, day and night, covering more than 5,000 square miles throughout the Bay Area. This following analysis draws from an aggregation of billions of preliminary data points generated by our platform. As we show below, the PM2.5 concentrations over time were quite variable during this time period.

Looking at measurements from our mobile sensing network, we can see how daily average and maximum PM₂.₅ levels varied by county from August 16 on. In every county, the graphs below also indicate a rapid rise in both daily average and daily maximum PM₂.₅ levels in the days after the skies turned orange on Wednesday, September 9 (delineated by the orange bar in the graphs below). Between counties there tended to be more variation in maximum daily levels than in daily averages.

With acute events like wildfires that can temporarily overwhelm the impact of pollution from other sources, proximity to the fires themselves can lead to higher daily maximums. Weather and topography influence both daily averages and maximums. The orange glow seen throughout the Bay Area was caused by smoke held high above the ground by the marine layer distorting the light from the sun. When that layer above mixed with the layer below, the smoke came down to ground-level where Aclima measures it and where we all breathe it. While the orange glow was gone, the smoke remained. Similar daily averages and maximums were found across all Bay Area counties, suggesting that the smoke was evenly dispersed across the entire Bay Area during this time period. The downward trend from September 14 to 15 continues for several days.

Statewide changes in PM₂.₅ and Ozone in California

Our last blog post looked at changes in air quality across California through August 25, drawing from regulatory data made available through California’s Air Quality and Meteorological Information System (AQMIS). Picking up where that left off, we drew from AQMIS data to generate visualizations showing county-by-county PM₂.₅ daily maximum and average levels throughout California from August 26 to September 15. The animations below also show fire hot spots as seen from space by NASA in bright orange.

In most California counties, both daily averages and maximums stayed relatively low compared to previous weeks until September 6. After that, most levels rose coinciding with several rapidly spreading fires including the Creek Fire and the Bear Fire, as well as fires outside of California.

Interestingly, average daily ozone levels actually decreased as the smoke blanketed much of California. As PM₂.₅ levels rose, ozone levels began to drop on September 9th throughout the state. Ozone is typically elevated in summer due to photochemical reactions in the atmosphere triggered by sunlight and heat that generate ozone from other gases. In this case, the blocking of the sun and the subsequent cooling off the ground and air beneath the massive blanket of smoke likely contributed to declining ozone levels over the past week in many parts of the state.

Despite these decreases in ozone concentrations, sustained unhealthy levels of PM₂.₅ have prompted alerts from air quality agencies to stay indoors and avoid outside activities. The Bay Area experienced its longest sustained period of unhealthy air in decades.

This preliminary analysis of both our hyperlocal air quality data in the Bay Area and regulatory air quality data California-wide just scratches the surface of what we can learn about the impacts of wildfires on the air we breathe and the environment we share. In turn, measuring the impacts of human-generated emissions year-round is essential to reducing those emissions and mitigating climate change. As our changing climate makes wildfires more frequent and more devastating it impacts us all.

The lightning storms, fast-moving wildfires, orange skies, falling ash, unhealthy air, and even declining ozone levels all serve as a stark reminder of the compounding impacts and unintended consequences of environmental destabilization. This is why we are dedicated to bringing governments, industry, and communities the ground truth on the state of our air, to accelerate climate action that reduces emissions to protect public and planetary health.